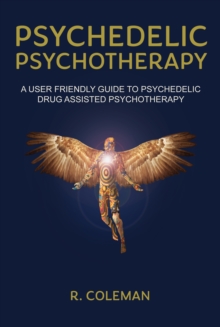 Psychedelic Psychotherapy is a comprehensive, easy-to-read resource for therapists and laypeople who need practical guidelines for psychedelic drug-assisted psychotherapy.
This book contains valuable insiders' information for those using psychedelics for their own healing, and for practitioners who facilitate their sessions.
Its focus is the nitty-gritty of healing trauma using MDMA, LSD, and psilocybin. It includes step-by-step guidance on how to safely and effectively navigate through the psychedelically-enhanced healing process.
Nach oben

Over a 10 year period the author self-administered over 150 psychoactive substances; both chemicals and plants. For each of them he recorded the essential and life-sensitive safety data, including the anticipated onset times, the common threshold doses, the routes of administration, and the expected periods of efficacy.

In addition, for every compound he also produced a trip report, detailing the qualitative experience itself, often in the form of a log of effects at various time checks. This delivered another invaluable insight, enabling, for example, an objective assessment of the extent of any loss of judgement and self-control.

This is a substantial body of work, embracing a wealth of direct support material, including addiction/overdose advice, legal briefings, and relative harm tables. Its contents also extend to cover aspects like drug tourism, drugs in culture, psychedelic exploration and the handling of mandatory drug tests. It is crammed with detailed reference data, and even includes its own drug dictionary.

The Drug Users Bible is a unique and unprecedented volume of encyclopaedic research, embracing the full extent of the drugscape. Its objective is to provide, without fear or compromise, core and critical information to support the health and welfare of the 250 million people in the world who use drugs.

"Life Begins At The End Of Your Comfort Zone!"